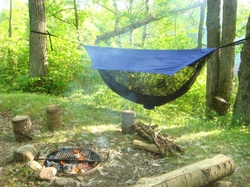 As we wound our way through America from a lake in North Minnesota to the Southernmost tip of Louisiana, our world was full of variables; the weather, the river, locks, dams, barge traffic and the next place we could find food and fresh water. Constants were few and far between, but in Hammock Bliss we found one. No matter what the weather was doing, if it was still light or pitch black, if the temperature would knock close to zero or slow roast us overnight, whatever mosquito metropolis we'd just limped through knee high mud to get to, we knew we could pitch up our hammocks, get a good nights sleep, wake up and do it all again.

Hammock Bliss came onto to our expedition's radar as we were reeled into the online realm of modern adventurers. We saw crazy places and epic journeys, people had pitched up Hammock Bliss hammocks everywhere, we had found a sleeping solution that dispels the long standing status quo;

This made us happy, basically because on a few fronts tents suck, they're bulky to pack, get stuffy in hot climes, have those poles that fight back (occasionally you win, oops broken pole) and importantly for us require flat, clear land to pitch on. So when we looked at the characteristics of our proposed journey; limited & unusual storage space, humid climate, not having a clue where we'd end up at the end of each day, Hammock Bliss hammocks were the answer.

So what does the Sky Tent 2 consist of? First off you have your outer layer, a specially cut rain fly with guy ropes that string out to keep up to two hammocks below safe from rain. Attached to the rain fly is Hammock Bliss's No-See-Um bug-proof netting, something quite simply we couldn't have lived without on expedition, no matter what we sprayed on ourselves the bugs never let off so our hammocks became our only sanctuary, laying there swinging comfortably, knowing for sure that the blood suckers are staying on the other side of that net.

Next you choose two hammocks to sling one-up, one-down, bunkbed style inside of the outer layer, and you can take your pick too, Hammock Bliss have a super light model, a single, double even a triple person hammock, as well as the new Sky Bed which has a sleeve sewn in to accept a blow up mattress meaning the hammocker can sleep completely flat! 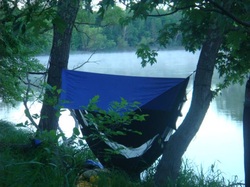 The biggest tick in the box is yet to come however, all Hammock Bliss's gear comes with its very own stuff sack sewn on, so when its time to rise and shine there is no messing about, you just untie your knots and literally shove the entire hammock system into the attached bag that is no bigger than 30 x 30cm, winner! Equally cool, to set up camp you simply pick your trees, scoop out the contents of the bag and start tying knots, and after 80 days of this we got pretty pro, I'm talking 2-4 minutes from boats to bed.

Woooweee did we end up sleeping in some strange places, some pictures of our favourites can be found below; we found ourselves slinging up under highway bridges, piers, in patchy trees next to car parks, hanging over knee deep swamp water flooded by the Mississippi, in public park shelters, anything goes! I'll leave you with a measure of how tough these things are, they survived us three, for 80 days, you'll be fine.

We loved the simplicity of HB's hammock systems, we relied on them for the length of the Mississippi and it's safe to say on any further adventures, we'll be bringing Hammock Bliss gear.