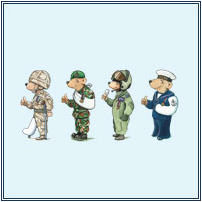 Help for Heroes was set up October 2007 out of a desire to provide support to those members of the armed forces that are injured in current conflicts. It was born out an immense  respect for those men and women who put their lives in danger on a regular basis on our behalf. There was a basic belief, as there is now, that those who put themselves in that danger and are unfortunate enough to be injured deserve the very best level of support.  Within eight months, H4H had achieved its initial aim – raising £8 million – but the money kept pouring in. Help for Heroes had touched a nerve with the British public and had fast become a national phenomenon. H4H have continued to receive an overwhelming response from the great British public, and after three and half short years over £100 million had been raised. Every penny raised for Help for Heroes is spent or allocated on direct, practical support of those wounded, sick or injured in the current conflicts.

To date, H4H has funded a variety of projects including the £8m Rehabilitation Complex at Headley Court, a new £3.5m treatment centre and £3m grant for Combat Stress, adaptive adventure training through the Battle Back programme and the creation of a £6m Quick Reaction Fund to support individuals in need.

In February 2010, they announced their key role in the creation of five regional Personnel Recovery Centres, which provide, in partnership with the MOD & Royal British Legion and other service charities, ongoing training and support for the wounded after Headley Court.

The Mississippi Challenge team smashed our initial £10,000 fundraising target and we've now set a new ambitious £20,000 target, every pound donated goes direct to Help for Heroes, the team and our awesome sponsors are covering all costs of the trip.